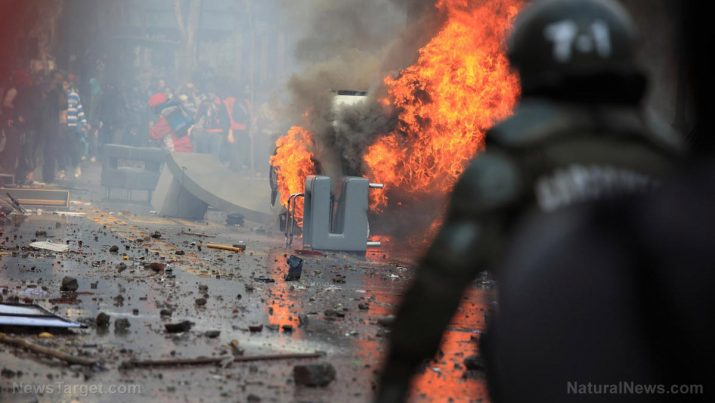 Today on most of America’s college campuses, Marxist professors are hard at work indoctrinating, not educating. They are teaching generations of young Americans Alt-Left political ideology that, quite frankly, is not compatible with constitutional republicanism, the bedrock of representative government.

These Left-wing pretend “academics” are especially exercised over the election of Donald J. Trump to the presidency. In the months before and since he took his oath of office as our 45th president, campuses especially have become hotbeds of Marxist-led violence that is directed almost solely at conservatives and Trump-supporting figures, many of which have been subjected to the most vile rhetoric, threats against their lives and physical violence.

But what is also becoming obvious is that the new generation of college-indoctrinated Marxist thugs is not being conditioned to reflexively despise, oppose and abuse those who share different political viewpoints. They are insidiously being taught to essentially become ungovernable at the very hint of opposition.

Take the case of Evergreen State College in Washington. Last week several students took over the library and allegedly threatened to kidnap a white professor who refused to kow-tow to their ridiculous demand that all whites “leave” the university for a whole day, as some sort of “awareness” skit aimed at promoting a minority political agenda. Understand that Evergreen State is one of the most liberal in the country, and that includes the professor in question, Bret Weinstein. But none of that mattered; because Weinstein dared to suggest that no race should be singled out for any demonstration, he was chastised, attacked and verbally abused by students — and the school administration not only allowed it but legitimized even the library takeover by announcing no one would be held responsible.

It’s absolutely beyond insane, but this is just the most recent example of what is taking place with the political indoctrination of our youth on college campuses. No wonder the Left’s darlings, Barack Obama and Bernie Sanders, continually push “free college for all.” They want as many American kids as possible attending these indoctrination centers.

Understand that this situation is not going to change anytime soon. Some people have suggested more conservative, constitutional-minded people should become college professors, or that Right-leaning colleges should be built. These are time-consuming endeavors, and while they are not bad ideas, it will be decades before any real change is seen.

Over the next four-to-eight years, the Democrats are planning to make as much of the country as ungovernable as possible, and they intend to do that primarily through public intimidation and violence. They are holding “summer camps” over the next several months to specifically train “community organizers” how to disrupt Trump supporters and Trump’s agenda. Left-wing “militias” are actively training for war.

Here’s what you can and should be doing to protect yourself and prepare for the violence that is coming:

— Make sure you have good supplies of emergency food and water.

— Either take a basic first aid course or start teaching yourself basic first aid, then practice it. Buy an emergency first aid kit and stow it in your house and in your vehicles. There are plenty of videos online to choose from; start with this one.

— Take some self-defense courses or, as an alternative, learn some basic self-defense moves and then practice them religiously. You can also buy a heavy bag or join a gym that has one and practice kicks and punches.

— Speaking of gyms, if you aren’t a member of one, find one to join. Get in better shape — cardio and strength training. You can’t defend yourself if you don’t have the conditioning for it.

— Always be armed — always — if you’re allowed to do so (always check local laws and ordinances). Shoot frequently; go to the range as often as possible. Become an expert with any weapon you own.

— Avoid taking part in any demonstrations. Wherever they are, avoid those areas (and know when they are going to happen).

— Refine your bug out plans (if you plan to bug out, that is — not everyone will).

— Get to know your neighbors and develop a current “neighborhood watch” plan.

— See if your local police or sheriff’s department has a “posse” or reserve force and ask to volunteer (some additional formal training may be required).

Our country is experiencing its worst political upheaval since the Civil War. Things are only going to get worse, especially in the short term. Prepare yourself for tough times.