Kathy Griffin sums up the deranged, violent, lunatic Left with video of the bloody, decapitated head of President Trump 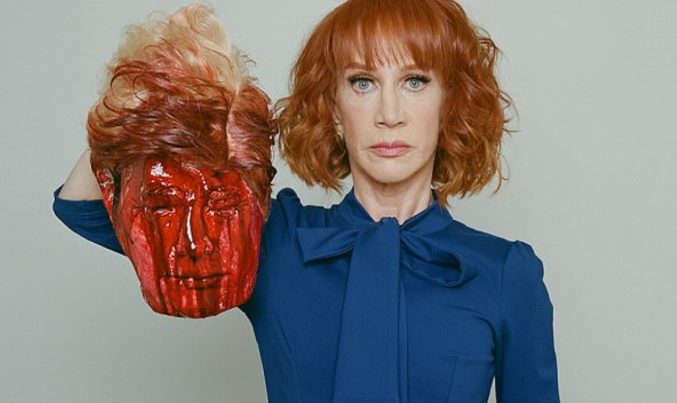 And now the full lunacy of the deranged, violent Left is on display for the world to see: “Comedian” Kathy Griffin posted a video of a bloody, decapitated head of President Donald Trump, providing yet more vile, hate-filled “fresh meat” to the lunatic Left which is already deranged beyond belief.

There’s no other way to say it: Kathy Griffin and the deranged, lunatic Left are mentally ill and pose a very real danger to society. This wretched, terrorist-style beheading video posted by Griffin encourages deadly violence against Trump supporters and sends a message that murdering political opponents of the intolerant Left is a normal, acceptable activity.

That’s what the deranged Left already believes, of course. Fanned into flames by a wildly dishonest, discredited fakestream media, Trump Derangement Syndrome has now escalated into a left-wing murderous rage that now celebrates gruesome images of beheadings that were once the sole domain of fanatical terrorists. What’s even more disturbing about all this is that Kathy Griffin apparently thought posting a video showing a bloodied, decapitated Trump head in her fist would somehow be hilarious or inspiring in some twisted way.

Indeed, it is rather inspiring to the insane, mentally ill Leftists who now demonstrate that they have no capacity to participate in a civilized society. What Kathy Griffin has really accomplished is depicting exactly what the insane, deranged Left now believes: Nearly all of them want Trump to be murdered, including the mentally ill bloggers and “journalists” who work for so-called mainstream news outlets like the Washington Post and New York Times. Even in those newsrooms, the mass murder of Trump and his supporters is a wildly popular notion. There’s no longer any tactic, any video, any level of violence that goes too far with the deranged Left. The Left-wing ZOMBIE assault: Kathy Griffin just informed all patriotic Americans that they have no remaining choice but to defend themselves against deranged, Left-wing aggressors who are out for blood

It’s now obvious to every patriotic American that the mentally ill Left is out for blood. The vile hatred, aggression and lies of the left-wing media has turned Left-wingers into mindless zombies seeking to murder and destroy. Just look at the mindless, zombie expression on Griffin’s face in the photo above: She’s emotionless, hollow, soulless and deranged, with the full facial expression of a sick-minded serial killer. It’s the perfect depiction of the zombie mindset of millions of other hate-filled deranged Leftists who are also calling for mass violence against President Trump and his supporters.

To patriotic Americans who still believe in the rule of law and honoring the outcome of elections, the underlying message in Griffin’s grotesque, demented “hate stunt” is unmistakably clear: We the People will sooner or later have to exercise our lawful right to self-defense by defending ourselves against deranged, Left-wing aggressors who are literally out to kill us. Kathy Griffin’s “joke,” you see, is not a joke at all. It is the direct expression of the sick desires and hate-filled violence that’s now routinely depicted by the extreme Left.

Kathy Griffin, in other words, just announced that there is no remaining room for civil discussions with the insane Left. There is nothing to negotiate anymore. There is no common ground rooted in civility or law. When a cult-like sect of society has been so utterly transformed into hateful, violent zombies that they would celebrate the bloody killing of the President of the United States of America, their continued aggression and threats can no longer be tolerated by those who seek to live in peace and harmony.

It really is time to start arresting and imprisoning people exactly like Kathy Griffin. It is time to send in the National Guard and conduct a mass arrest of crybully students who are now resorting to left-wing terrorism tactics on colleges campuses across America. It’s time for supporters of President Trump to prepare for “Second Amendment activation” which would involve the tactical defense of this nation against the insane, violent coup attempt that’s now being waged by the fascist media and its obedient Democrat puppets.

If all of us who believe in law and order, free elections and our Constitutional Republic just sit back and continue to watch the psychotic Left openly advocate our murder, then we will lose this nation to violent fascism. Google, Facebook, Youtube and Twitter are already silencing nearly all voices that don’t blindly support their totalitarian info-fascism. Censorship against the independent media has never been more extreme in the history of the internet.

JOURNO-TERRORISM: How the lying left-wing media generates hatred and promotes the murder of political opponents

All that you are witnessing here is the result of the hate-filled frenzy that has been deliberately generated by a fascist “mainstream” media engaged in deliberate acts of what I have dubbed “journo-terrorism.” Through a never-ending series of deliberately false, hate-filled articles quoting fictional “anonymous sources,” the Leftist media has abandoned every last tenant of ethical journalism and is now functioning as a fascist propaganda machine that advocates murder.

As I wrote in 2016 in an article entitled JOURNO-TERRORISM: The goal of the left-wing media has always been to terrorize voters and hypnotically control them using orchestrated fear programming:

Members of the leftist media smugly claim they advocate love, compassion and progressivism, but any honest analysis of their content leads to the conclusion that their reporters are journo-terrorists. They deliberately fabricate falsehoods about their political enemies to effectively hypnotize their readers into being terrified of them. FALSE FEAR is the mantra of the journo-terrorists. This is exactly why there was so much intense hatred on the left for Donald Trump — the media whipped it up on purpose by using false scare stories…

The goal of the left-wing media, of course, is to overthrow the legitimate United States government, nullify the will of the voters and set off a cultural war that’s now being framed as deliberate genocide against Whites.

Any person who isn’t a Democrat is now being targeted by the media, the universities and mentally ill Left-wing extremism advocates (like Maxine Waters) who clearly want to see all opposition against the Democrat fascist agenda silenced (even by means of murdering people, since the Left believes the ends always justify the means). Left-wing journalists, in other words, are complicit in the violence and genocide now being openly invoked by the deranged Left.

As Paul Joseph Watson recently reported, an anthropologist named Michael P. Oman-Reagan is now openly calling for “white genocide,” stating it’s a “good plan” because White people teach children to be “full of hate.” (Yes, seriously, this is the demented logic of the hate-filled Left. They label others “racists” while calling for skin-color-based genocide in the very same sentence.)

The same academic then insisted that America is a “racist nation” and therefore all White people should be murdered to eliminate the racism. With full irrationality on display, this is akin to arguing that the best way to stop people from committing violence is to murder them before they can become violent, thereby stopping the violence with violence. It’s delusional, in other words, yet twisted thoughts like this are now being seriously argued by demented academics who are teaching the next generation of obedient zombie youth how to engage in politically correct hatred and genocide while shrouding mass death and violence under the delusional banner of “tolerance” and “equality.”

As yet another example of the insane, intolerant Left, consider the recent clash between a racist student mob and a white, liberal college professor: The insane student mob — acting like terrorists — demanded that all white people leave campus or they might face violence.

Over the last decade or so, we’ve all watch in horror as America’s universities have been turned into what can now clearly be called extremism training camps for left-wing fascists. Instead of teaching students to be responsible adults with critical thinking skills, colleges and universities now focus on obedience training coupled with deeply-ingrained hatred, intolerance and violence toward those who have opposing points of view.

What we’re witnessing in America today is far beyond simple disagreement. The Left has demonstrated beyond any doubt that it is unwilling to participate in a civilized society and demands nothing less than a totalitarian, fascist regime run by violent Leftists.

The Left respects no law, in other words, no institution, no election outcome, no branch of government and no executive decision that it does not agree with. When elections produce outcomes the Left doesn’t like, its members fabricate conspiracy theories to claim the election was stolen. When the executive branch of government is not controlled by the Left, its members say the executive should have no power. When independent thinkers, journalists and bloggers speak with reason and intelligence against the insanity of the deranged Leftist narratives, they are deliberately censored and silenced by the tech giants which have no decided to memory hole all content that doesn’t support the genocidal, hate-filled narratives of the Left.

The Left, in other words, has become a dangerous, violent, intolerant CULT of murder advocates and would-be serial killers. They have abandoned all civility, all ethics and all respect for law. They seek absolute power over all legislation, unlimited genocide against Whites and Christians, total obedience to insane Left-wing narratives and unrelenting conformity — even cult-like worship — from every member of society.

This is precisely why the Left has become the single greatest threat to our Republic… and it’s why the radical Left must be stopped.

A day is coming when patriots rise up and defend their nation, their culture and their borders against the mentally ill Left as depicted by Kathy Griffin

Mark my words, friends: I see a day coming soon when patriots across America rise up in defense of their nation, their culture and their borders. I see a day when law-abiding, armed, patriotic citizens make mass arrests of deranged, child-molesting lawmakers and legislators who are traitors to our country. I see a day when Left-wing fascist propaganda publishers are occupied and overrun by concerned citizens; where the tech giants are seized and forced to end their fascist censorship; and where mayors of “sanctuary cities” are arrested and incarcerated for aiding and abetting violent criminals.

Kathy Griffin has just advertised a great warning to us all, essentially saying that we are now down to the last resort option to save our nation from the insane, violent, hate-filled Left… and that if we don’t, they will cut off our heads, murder us in the streets and overthrow the government in order to install their own sick version of a totalitarian police state.

Remember: The Left hates conservatives more than it hates machete-wielding Muslim terrorists. The Left would much rather see Islamic fundamentalists rule over America than see Trump remain in the White House. That’s how insane they’ve truly become.

If you are not yet arming up under the Second Amendment, you are not at all prepared for the wave of insane, zombie-like violence the Left is about to unleash across this nation. You will be called soon to defend this nation against violence and derangement. Make sure you are fully prepared and ready to take all necessary, lawful steps to defend your nation, your culture, your community and your life. You will have the police, the National Guard, the military and the President on your side. Your enemies will be numerous but disorganized, untrained and hopelessly outgunned. If you are willing to defend your nation, you will succeed in doing so. But if you are more interested in appeasing the conformist demands of those who are violent, psychotic mental patients, then you will lose everything (including your life, most likely).

Thank you, Kathy Griffin, for elucidating the remaining options for American patriots who refuse to surrender this nation to your deranged lunacy.

Get prepared now at Gear.news and Survival.news.